How much do procurement jobs pay?

The Chartered Institute of Procurement and Supply has developed an interactive salary map where you can discover what the average salary is for your region and competency level. 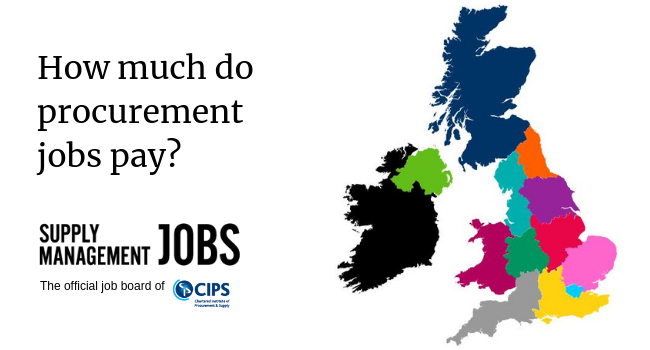 What is the average procurement salary for my region?

Throughout the UK, procurement salaries differ for each geographical region, with Greater London and the South East offering the highest average salaries at £58,960 and £48,049 respectively.

The overall UK average salary for procurement professionals is £45,159 based on CIPS/Hays Procurement Salary Guide and Insights 2019.

How much can I expect to earn at my level?

CIPS Salary Map lists the average salaries depending on the five competency levels, which are taken from the CIPS Global Standard and represent core skills and tasks identified at each advancing stage of the profession. Below is a summary of the salaries you can expect at each level of your professional career.

Tactical level refers to the most junior procurement roles, such as procurement administrator, purchasing assistant or stock controller. An individual at this level would have the ability to recognise and describe key transactional processes for procurement and supply.

Operational level refers to those who have had some experience in the profession but are not yet at managerial level. They will be able to deliver key tasks associated with procurement and supply operations as well as provide advice and guidance to key stakeholders. Roles include assistant buyer, assistant contract officer, contract analyst, buyer, procurement specialist, contract officer, supply chain analyst and supply chain planner.

Continuing the trend of having one of the highest salaries at other levels, the South East has an average salary for this competency level of £32,473. This is trumped by Greater London where the average salary is £38,165. Conversely, the North East and Yorkshire and Humber see the lowest salaries at £28,411 and £28,056 respectively.

Managerial level refers to roles where an individual has advanced to a higher level in their career and may have subordinates to manage. At managerial level an individual will have the expertise to improve, develop and fulfil organisational and functional objectives. Roles include senior buyer, procurement executive, procurement specialist, contract officer and supply chain executive.

Greater London and the South East once again boast the highest average salaries topping the scale at £50,654 and £45,895 respectively. Meanwhile, the lowest average salary in England is £39,089 (North East) and lowest in the UK comes in at £37,794 for Northern Ireland.

When an individual reaches professional level, it means that they have significant experience in the procurement profession and have the ability to formulate, direct and advise, change manage, lead and influence internal and external stakeholders. Typically, they will be in a role such as strategic procurement manager, head of commercial, supply chain manager, head of logistics/transport and operations manager.

Surprisingly the West Midlands offers almost the same average salary for this level as Greater London, with an average salary of £54,838 versus £54,979. Whilst Northern Ireland and Scotland have the lowest overall average for the UK, £43,000 and £43,026 respectively.

Advanced Professionals have achieved the highest level of qualification offered by CIPS - Chartered status. They lead procurement teams within an organisation and influence the board to adopt leading-edge procurement strategies and establish best practice. Usual job roles include procurement/supply chain director and chief procurement officer.

CIPS Salary Map shows that Greater London continues to take the top spot with an average salary of £90,134 for this competency level, with the South East following close behind at £88,096. Meanwhile, Northern Ireland averages only £53,000 for their most senior procurement professionals. The average salary in the North West is £69,638, making it the lowest average salary in England.

How are salaries changing in the procurement profession?

The above highlights that there are some highly-competitive salaries out there for procurement professionals, and that is only set to get better. In the CIPS/Hays Procurement Salary Guide and Insights 2019, it was reported that procurement salaries increased by 5.3% last year, which not only compares favourably, but exceeds the 2.7% national average.

The report also found that, whilst salaries remain at their highest in London (up 3.2%), the North West continues to grow with salaries up 7.8% on 2018. This is largely due to this region being positioned as the destination for organisations looking to take advantage of lower overheads and more space. Northern Ireland and the North East have also benefited from salary increases this year. Find out more in the video below.

Procurement is increasingly being seen as an important aspect of every business and professionals are starting to reap the benefits of higher salaries.

If your salary didn’t stack up against the regional/competency level averages, maybe it’s time to look for that next role. Search Supply Management Jobs, the official job board for CIPS.